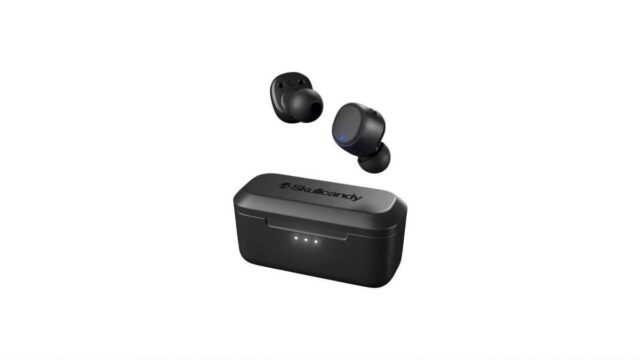 The Skullcandy Spoke True Wireless are budget-friendly in-ears that come with a charging case to keep them charged while you’re out and about. They have a v-shaped sound profile that provides extra thump and punch to your mix while brightening and sparking vocals and lead instruments. They come with a few EQ presets, but you can only access them using the touch-sensitive controls, and there’s no way to tell which one you’re listening to. Using the controls might also force them further into your ears, which isn’t particularly pleasant. 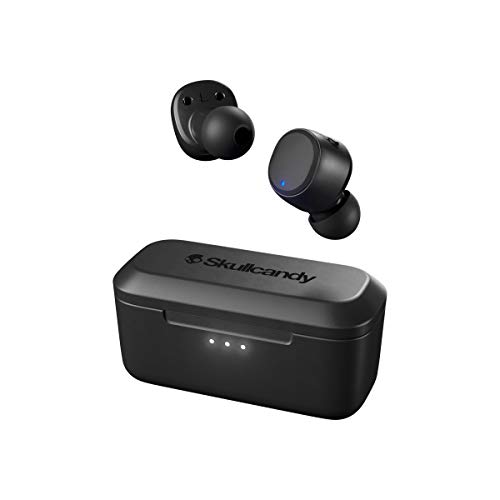 The Skullcandy Spoke True Wireless Earbuds have a simple, all-black style and are true wireless in-ears. They’re a little thick and stick out a little from your ear.

The Skullcandy Spoke True Wireless Earbuds are not particularly comfortable. They come with a variety of earbud tips in various sizes so you can select the ideal fit for you. They are, however, a little bulky and sit deep in your ears. Because using the controls can put additional pressure on your ears, you must keep the bud in place while issuing commands to minimize pain. As a result, they’re not as comfy as the Skullcandy Sesh Truly Wireless and Skullcandy Jib True Wireless, which are both available at a lower price point.

The controls are satisfactory. To play/pause your audio or answer/end a call, tap either bud once. The voice assistant is activated by pressing three times, and changing the EQ mode is done by pressing four times. You may also turn the volume down by pressing the left bud twice, or up by pressing the right bud twice. You can skip to the previous track by holding the left bud, or the next track by holding the right bud. The controls are clicky, and audio feedback is provided for Bluetooth pairing, adjusting the EQ mode, and attaining the maximum and minimum volume levels. Unfortunately, manipulating the controls puts additional strain on your ear, and there’s no way of knowing which EQ mode you’re in.

The Skullcandy Spoke True Wireless Earbuds provide excellent breathability. They don’t trap heat around your ears, and you shouldn’t notice a difference in temperature while wearing them, thanks to their fully wireless construction.

Skullcandy’s Spoke True Wireless Earbuds come with a nice carrying case. It may be used to charge headphones and includes three LED indicators that indicate the remaining battery life, which is useful.

The Skullcandy Spoke True Wireless Earbuds are well-constructed. The majority of them are constructed of plastic, which feels strong and long-lasting. They also have an IPX4 water resistance rating, which we don’t test at the moment. The earbud tips, on the other hand, are a possible weak point because they may rip over time.

The stability of these headphones is excellent. They should stay in place during casual listening sessions and more intense physical activity, even if they poke out a little.

Noise isolation is good with the Skullcandy Spoke True Wireless Earbuds. They have a hard time blocking out background noises with a lot of bass, such as bus and plane engines. They do, however, perform better with higher-frequency background noise, so you don’t hear the sounds of people speaking or the hum of air conditioners.

The Skullcandy Spoke True Wireless Earbuds have an enthralling, v-shaped sound profile that brings vocalists and lead instruments to life. They have a greater thump and punch in the bottom range, which may appeal to listeners of bass-heavy genres like EDM but may be too much for those who want a more neutral sound. There are a few EQ settings available to assist you to tailor their tone. They don’t have a companion app, thus there’s no way of knowing whatever EQ preset they’re on because they don’t have one.

The bass accuracy of the Skullcandy Spoke True Wireless Earbuds is poor. The full range is heavily focused, resulting in a deep thump and punch in your mixes. Some listeners, however, may find this a little too boomy and overbearing.

The mid-accuracy of these headphones is excellent. While the low-mids have a minor overemphasis that can give the mix a muddy quality, the rest of the range is well-balanced and neutral. As a result, the voice and lead instruments stand out.

The imagery on the Skullcandy Spoke is fantastic. Because the weighted group delay is below the audibility threshold, the bass is tight and the treble is transparent. Furthermore, the phase, amplitude, and frequency response of the L/R drivers in our test unit are well-matched, allowing things such as speech and footfall in the stereo image to be correctly located and localised. However, because these findings are only valid for our test unit, your results may differ.

The microphone has a poor noise cancellation capability. Even if you’re calling from a relatively busy setting, it may fail to distinguish your voice from other noises, resulting in your voice being drowned out.

The battery life of the Skullcandy Spoke is average. They have a battery life of little under six hours on standby, which may not be enough for extended days on the go. Fortunately, their portable charging case provides some more charges, and recharging takes only a few minutes. However, because battery life varies depending on usage, your actual experience may differ.

The Bluetooth functionality of the Skullcandy Spoke True Wireless Earbuds is adequate. They’re Bluetooth-compatible, although there may be some audio lag on iOS, and their latency with Android and PCs is likely too high to be acceptable for streaming films. Some programmes, however, adjust for latency, so your actual experience may differ.

The Skullcandy Spoke is suitable for a variety of applications. These lightweight, well-made headphones are sturdy enough to use at the gym. They come with a few EQ presets for sound modification, albeit their v-shaped sound profile may not be suitable for enthusiasts of neutral sound. While they can block out common workplace noise like employees conversing around you, they struggle to block out bass-heavy sounds like bus and airline engines, so they might not be suitable for your commute.