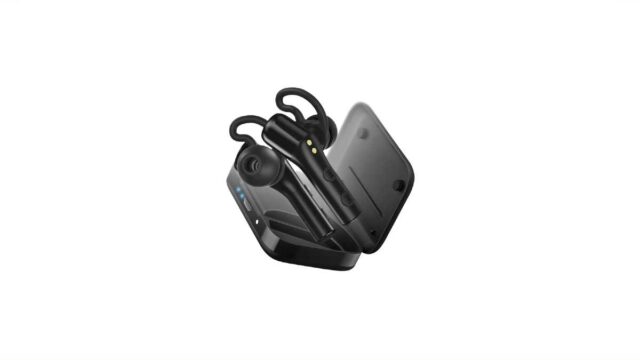 The Treblab X5 is good all-around fully wireless closed-back in-ears that are excellent for sports. They have a unique design that looks similar to Apple AirPods but is larger. They have strong isolation output and respectable sound quality that will satisfy most casual listeners. The fact that these are a budget choice in the truly wireless earbuds category shows in their plasticky and cheap-feeling construction. They also have low battery life and will need to be changed often. On the plus side, their breathable nature and stable fins would be ideal for active people on a budget.

The Treblab X5 are completely wireless in-ears with an unusual design. They have a design that is similar to the Apple AirPods or the Anker Liberty Air, with long stalks that protrude from your head, but they are very bulky and can seem unusual at first. Because of their stability fins, they also have a sporty style. These are available in either an all-black or all-white design.

Since they don’t go as far into your ear canal as traditional in-ears, the Treblab X5 are very comfortable. They also have a plethora of tip options. You get three different-sized silicone tips and three different-sized foam tips, which some people would prefer. You also get three different stability fin choices, but they’re a little bulky and may get stuck between your ears. They’re big for completely wireless in-ears, but they’re still light and don’t annoy you once you put them on. The in-ear fit, on the other hand, may not be as comfortable for everyone, and some users may encounter ear fatigue after a while.

The X5 has a strong control scheme, but it may take some getting used to. Each earbud has two buttons that allow you to access basic functions. You can handle your calls and songs, skip tracks, and use the voice assistant on your mobile. You also get volume control, which is a nice feature that not all fully wireless headphones have. However, there are a few shortcomings in this control system. It might be a little difficult to use at first. Unpausing was one of the most vexing instructions. Keep the upper button of either bud for a second to play/pause it. A single tap on the left button, on the other hand, will take you to the previous track, which is inconvenient when you’re trying to unpause your music.

The Treblab X5 can easily fit in your pockets or purse, just like most completely wireless headphones, if you want to take them to the gym. They’ll be easy to transport, and they’ll come with a tiny hard case. They’re still tiny enough to fit into your pockets.

The X5’s charging case is adequate. It’s made of thin plastic that might crack, so it feels a little flimsy. The headphones are also completely protected against slight water exposure and scratches thanks to the shell. It can also withstand any impact from falls; however, unlike most headphone cases, the right earbud goes on the left side of the case and vice versa.

The X5’s build quality isn’t the best, and it feels cheap. They’re made of thin plastic and sound as though they’d break if you sat or walked on them by mistake. Their case is also small and compact, and it doesn’t seem to have enough protection for the headphones. On the positive side, they are water resistant to IPX4, but we don’t have a test to assess this yet. In addition, IPX4 is cheaper than most of the sports-oriented headphones we’ve seen so far. Consider the Anker Soundcore Liberty Air, which has a similar design, or the Anker Soundcore Liberty Lite, which has a denser and more robust overall construction.

The Treblab X5 headphones are highly reliable and are an excellent choice for physical activity. Their stability fins are suitable for more intense workouts, and they have a snug fit overall. Even if the headphones are a little bulkier than traditional fully wireless in-ears, the earbuds don’t jump around when exercising. Even, by using their control system, the fit doesn’t change much, which is a good thing. Their wireless nature removes the likelihood of a cord being tangled and yanking the headphones out of your ears.

The X5 has a good isolation performance. They isolate by around 7dB in the bass range, where aeroplane and bus engines rumble, which is good. They reduce outside noise by 22dB in the mid-range, which is critical for blocking out speech. They gain more than 48dB of isolation in the treble range, which is occupied by sharp sounds like S and Ts and fan noises like A/C systems.

On a single charge, we got just over 3 hours of continuous playback, which is disappointing given Treblab claims 6 hours of battery life. However, you can get up to four extra charges from their charging case, bringing the total listening time to about 15 hours if you take any breaks to charge the headphones in between. They also have an auto-off timer to conserve battery, but it’s only set to 3 minutes, which is a little short and may be annoying. The case also turns off after 8 hours of inactivity, when the earbuds are removed from the case, or when the buds are fully charged, according to the specifications document.

The X5 is a pair of basic Bluetooth headphones. Unfortunately, they can only connect to one device at a time and do not support NFC, which makes pairing with cell phones and other NFC-enabled devices a breeze. You can, however, attach each earbud to two separate devices.

For watching video content or gaming, their latency, like that of most Bluetooth headphones, might be a little too high. However, some devices or applications tend to compensate for the delay, so you can not feel it as much.

Owing to their recessed mid-range and thumpy bass, they don’t have the finest audio reproduction, but most casual listeners will be pleased. On the plus hand, they are relatively lightweight and stable in the ears, making them ideal for sports. They don’t do a great job of isolating low-frequency sounds like engine rumbles, so they’re not perfect for driving, but they do block ambient noise and are suitable for the workplace. They do, however, have a small battery life, so you’ll have to recharge them every three hours. Their latency, like that of most Bluetooth headphones, can be too high for watching TV or gaming.

Although they don’t isolate many lower frequencies, such as engine rumbles, they are still small and portable. They’re fine for short bus trips, but you could get ear pain if you fly for a long time. Furthermore, their battery life is limited for long journeys, so you’ll have to recharge them regularly during your travels or commutes.