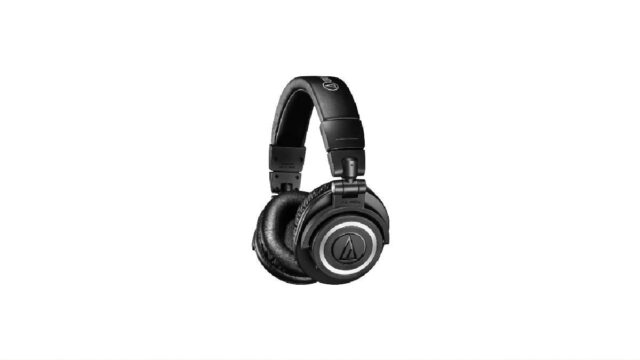 The Audio-Technica M50xBT wireless headphones have a good sound and are suitable for critical listening. They’re the wireless version of the well-known wired ATH-M50x, and they perform similarly. The M50xBT headphones feature a good audio reproduction that isn’t quite as good as the wired counterpart, but their design is nearly same, making them fairly pleasant and durable headphones. They have a long battery life, however its compatible app is lacking in features, which is frustrating. They also have too much latency for watching video content, however they may be used passively with the provided audio cord to eliminate the latency concerns, even if the battery is dead. 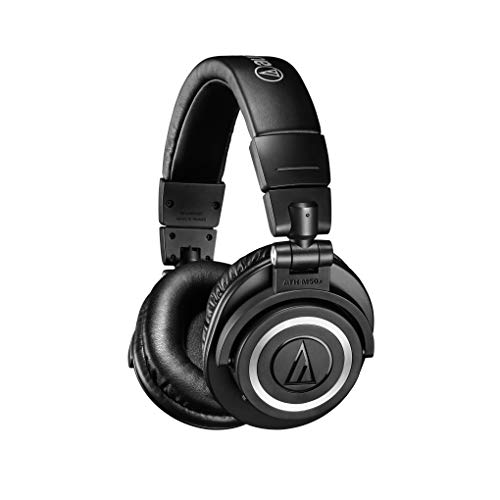 The Audio-Technica ATH-M50xBT is remarkably similar to the ATH-M50x wired counterpart. They feature the same boring studio aesthetic with an all-black design, which some people may prefer. They still have silver accents on the ear cups surrounding the brand emblem, and they look decent but aren’t particularly distinctive. Unfortunately, unlike the wired ATH-M50x, they do not exist in any colour variant to match your desired style.

The Audio-Technica ATH-M50xBT is built in the same way as the wired M50x and is just as comfy. They’re a little bigger than the ATH-M40x, so they’re more comfy and ideal for larger ears, but they’re a little shallow. The headphones are fairly light, do not exert excessive strain on the head, and do not feel overly tight. The ear cup cushioning is comfy, but it may seem rigid immediately out of the box.

The Bluetooth version, unlike the M50x, has controls on the ear cups allowing on-the-fly functionality. With a lengthy touch over the logo on the left ear cup, you can access your device’s speech assistant like Siri or Google Assistant, as well as volume control and play/call management. It’s finicky, though, and doesn’t seem to operate regularly. However, the control scheme is fairly simple to use, and the feedback supplied by the physical buttons is enough. Audio feedback is also provided for track skipping, volume control, and music play/pause. Hold down the ‘+’, ‘-‘, and centre control buttons simultaneously for about eight seconds to obtain Bluetooth pairing.

The ATH-M50xBT, like other over-ears, traps heat under the ear cups. You should expect more sweat if you use these headphones during your exercises because they aren’t built to be sports headphones. For casual listening, this shouldn’t be a problem, although breaks are necessary to allow the ears to cool down.

The Audio-Technica M50xBT over-ear headphones aren’t very portable, but they do fold up into a smaller package that can be easily stowed in a bag. They also contain swivelling cups that lay flat when not in use, making them more comfortable to wear around your neck. They also include a soft pouch to keep them safe when travelling.

The Audio-Technica ATH-M50xBT come with a very similar pouch to the wired variant. It should protect the headphones against scratches and very light water exposure but won’t help much if you drop the headphones.

The ATH-M50xBT is essentially the same as the regular M50x, but without the cable. They’re composed of strong plastic, which makes them feel sturdy and well-crafted. The headband has a metal frame and does not seem flimsy. The joints appear to be the weak parts of the headphones, as they are in much of the Audio-Technica lineup, and could be the first thing to fail.

The Audio-Technica ATH-M50xBT headphones aren’t made for sports, and they don’t stay on your head very well. They will fall out of your ears during athletics and high-intensity activities. This shouldn’t be an issue for casual listening, and because they’re wireless, you won’t have to worry about a cord getting tangled up in something and pulling the headphones off your head.

The bass response is outstanding. The LFE (low-frequency extension) is set to 10Hz, which is quite good. Furthermore, the entire bass response is well-balanced and even, but slightly overemphasised by 2.5dB. This adds a little extra thud and rumble to the headphones, which some people may enjoy, especially aficionados of bass-heavy music. They do, however, have a boomy sound due to the high-bass overemphasis.

The performance in the mid-range is excellent. The overall response is very flat, although the low-mid and mid-mid frequencies have an audible dip. Vocals and lead instruments will sound thin and pushed to the back of the mix as a result of this.

The Imaging on the Audio-Technica M50xBT is excellent. They have a weighted group latency of 0.36, which is excellent. In addition, the group delay is almost totally below the audibility threshold, as shown in the graph. This guarantees that the bass is tight and the treble is clear. Furthermore, the amplitude, frequency, and phase response of our test unit’s L/R drivers were well-matched, which is critical for precise placement and localization of items (voices, instruments, video game effects) in the stereo image.

The wireless M50xBT has a poor soundstage. The PRTF graph demonstrates a good amount of pinna activation and good precision. However, there is no notch at 10KHz, thus the soundstage will be regarded as being inside the listener’s brain rather than in front of them. Consider the open-back HiFiMan ANANDA-BT Wireless if you want wireless headphones with a more open and spacious soundscape.

The isolation performance isn’t up to snuff. There is no active noise cancellation on these headphones, and there is no bass isolation. This implies they’ll let all the engines rumble in. They isolate by around 9dB in the mid-range, which is useful for shutting out speech. They achieved 30dB of isolation in the treble range, which is populated by sharp sounds like S and Ts.

The performance in terms of leakage is average. The majority of their leakage occurs in the mid and treble regions, between 400Hz and 6KHz, which is a wide range. The aggregate volume of the leakage, however, is not excessive. At 1 foot away, the leakage averages 43dB SPL and peaks at roughly 54dB SPL, which is around the noise floor of most offices, with the music at 100dB SPL.

The noise-cancelling ability of the built-in microphone is average. The ATH-M50xBT achieved a speech-to-noise ratio of 11.5dB in our SpNR test, indicating that they are best suited for quiet areas and will struggle to distinguish speech from ambient noise in moderate and noisy contexts.

The ATH-M50xBT has an excellent battery life, with roughly 38 hours of continuous playback. Even if you are a heavy listener, they should easily last a few days. They do, however, take about 5 hours to fully charge, which is longer than typical and may be too lengthy for some. They also lack any power-saving features that would help to extend battery life. On the plus side, you can still use them with Bluetooth while charging them with the USB wire. Even if the battery dies, the headphones can be used passively using the provided 1/8″ TRRS audio connection.

Because the Audio-Technica ATH-M50xBT headphones support Bluetooth version 5.0, you may get greater wireless range results than we saw on our test bench, which only supports Bluetooth 4.2. They don’t support NFC and can’t connect to many devices at the same time. Hold the ‘+’, ‘-‘, and middle control buttons simultaneously for roughly eight seconds to enter Bluetooth pairing mode. After then, the headphones beep, and a voice prompt informs you that they’ve been detached. To indicate that they’re in pairing mode, the indicator light on the ear cup begins rapidly blinking white. When you’ve finished pairing, you’ll hear an audio cue and the indicator light will gradually fade in and out.

The ATH-M50xBT, like most Bluetooth headphones, has a significant latency, which means they may not be suited for watching videos or playing games. They support aptX, which helps reduce latency slightly but not significantly. However, depending on the device and streaming app you use, certain devices and video content apps include some form of latency compensation, so you may not be affected by audio delay. To totally minimise delay, you can also use the headphones passively with the provided 1/8″ TRRS cable.

You can use the ATH-M50xBT passively with the included 1/8” TRRS connection, which eliminates latency issues. When the battery runs out, you may use the headphones connected, which is quite useful. The headphones offer audio and microphone capabilities, and the in-line remote works with consoles and PCs.

The audio reproduction of the ATH-M50xBT is good and well-balanced, making it suited for a wide range of music genres. They don’t filter out much ambient noise, so they’re not the ideal choice for commuting, but they’re a good choice for the office because they don’t leak too much at moderate volumes. The over-ear form isn’t suggested for sports, and while they’re comfy for extended movie or gaming sessions, the latency is too high for these applications unless you utilise the provided audio connection to use them passively.