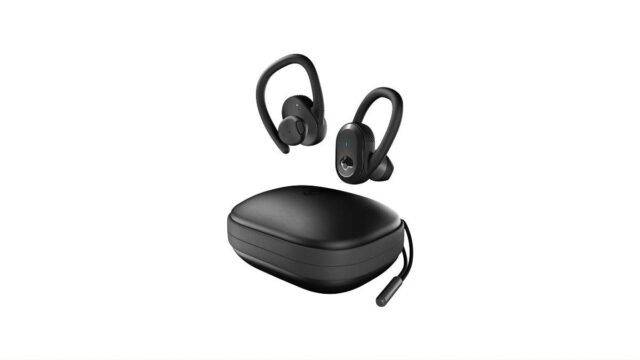 If you’re searching for a pair of wireless sports earphones, the Skullcandy Push Ultra are a good choice. With a silicone build that feels like it’ll take a couple of drops and an IP67 designation for dust and water protection, they provide a relatively secure fit and feel quite strong. Unfortunately, they feature an imbalanced sound profile, a short battery life on a single charge, and a poor ability to block out ambient noise, though the latter can be useful if you’re out for a run and want to keep alert.

The Skullcandy Push Ultra are earbuds with an ear hook style that are wireless. They stand out from more traditional rivals like the Mpow Flame Pro Truly Wireless, which has huge buds that sit at an outward-facing angle and don’t go very far into the ear canal. They’re almost completely covered in a sporty silicone-like substance that should successfully repel fingerprints.

The Skullcandy Push Ultra are a little on the heavy side. They’re one-size-fits-all, unlike many other wireless earbuds, with no option for alternative sized ear tips. Over long listening sessions, their hefty exterior buds may cause some tiredness. The ear tips, on the other hand, don’t apply much strain due to their shallow, angled fit, and their slightly flexible ear hooks should fit a wide range of ear shapes and sizes.

The control interface on the Skullcandy Push Ultra is decent. Controls are duplicated on both buds, ensuring that you have full functionality regardless of whatever device you’re using. Track skipping and rewinding are likewise controlled by the two volume buttons, with a two-second push on the up or down buttons resulting in track skipping or rewinding, respectively. To play and pause music, as well as answer calls, tap the large black centre cap. A triple press activates your phone’s voice assistant, while a double tap followed by a two-second hold changes the EQ presets to “Music,” “Movie,” or “Podcast.” An audible voice notification lets you know when you’ve switched modes.

These earphones come with a good charging case that supports wireless charging and should keep them safe from bumps, drops, and scratches. It’s big but well-made in general, though the charging port on the inside of the shell has a hard time aligning with the buds, making the recharging procedure a little more finicky than it has to be.

The Skullcandy Push Ultra has a good build quality. The case and buds are composed of a silicone-like material that appears to be durable enough to withstand a few drops, while the case’s zipper appears to be a possible weak point. They’re also IP67-rated for dust and water protection, though we don’t test for that.

Because of its ear hooks, the Skullcandy Push Ultra should stay in your ear for a long time. They’re significantly less secure than the Mpow Flame Pro Truly Wireless due to their shallow in-ear fit and absence of an airtight seal.

Overall, the Skullcandy Push Ultra’s sound profile is rather inconsistent. In most tracks, the bass is extremely missing, resulting in a loss of punch and body. The midrange is fairly accurate, albeit a tiny dip in the range means that vocals may be pushed to the rear of the mix. Treble is also a little uneven, with some finer vocalists and instrumentation missing nuance. If you want more thud and rumble, check out the Skullcandy Indy Fuel Truly Wireless, which have a more balanced sound profile.

The bass accuracy of the Skullcandy Push Ultra is terrible. With virtually little low, mid, or high bass, it’s extremely underemphasized throughout the whole spectrum. Whatever musical genre you prefer, tunes are lacking in thud and body. However, because their bass response is highly dependent on the fit and positioning of the earbuds, you may have a totally different listening experience.

The mids on these earbuds are quite accurate. They sound clear and present, albeit a fall in the upper mid-mid and lower high-mid ranges weakens and pushes voices and lead instruments to the rear of the mix.

These earbuds have adequate treble accuracy. Some finer details are dulled by dips in the low and high treble ranges. However, because treble is largely reliant on the position of the earbuds, your experience may differ significantly.

The Skullcandy Push Ultra performs poorly in terms of peaks and dips. A bump that stretches from the mid-bass to the mid-mid region adds boominess to the mix and muddles voices and lead instruments. Vocals and lead instruments are pushed to the rear of the mix when the mid-mid range dips. Some sibilants and details sound piercing and too sharp due to steep peaks in the mid-treble range.

The stereo image performance of the Skullcandy Push Ultra is excellent. Their weighted group delay is below audibility, resulting in a tight bass and clear treble. While their L/R drivers have a good phase response match, there is a tiny amplitude and frequency mismatch. This has a minimal impact on their capacity to correctly duplicate an object’s placement in the stereo field, and as a result, the listening experience is slightly less immersive. However, these findings apply just to our test unit, and your personal gadget may behave completely differently.

These earphones, like every other pair of earbuds that circumvent outer ear engagement, offer a terrible passive soundstage. It’s worth noticing that, compared to other earbuds, their slightly loose seal offers a little more expansive, open soundscape.

The Skullcandy Push Ultra are terrible at shutting out background sounds passively. If you wear these on public transportation, you’ll hear a lot of rumbling from bus engines and fellow riders because the loudness of sounds in the bass and mid-range is barely lowered at all. When it comes to higher-pitched ambient noise, they do slightly better, but not by much. However, if you’re a runner who wishes to keep aware of your surroundings, their poor noise isolation may be beneficial.

These earphones have a satisfactory leakage performance. If you want to listen to your music loudly, escaping sound happens largely in the treble band and is detectable above the noise floor of an average office, which might be bothersome for individuals around. If you’re looking for a set of Skullcandy really wireless in-ears with reduced audio leakage, consider the Skullcandy Sesh Evo True Wireless.

The Skullcandy Push Ultra’s microphone has low recoding quality. Your voice may come across as thin, muffled, and missing in detail to those on the other end of the call.

The noise-handling capability of the microphone is abysmal. It has a hard time separating speech from even mild background noise. These are generally not the ideal option if you routinely make phone conversations in busy or noisy surroundings.

The battery life on these earphones is average. They barely last a little more than 5 hours on a single charge and don’t have any energy-saving features like an auto-off timer, which is a bit disappointing. They charge quite quickly, taking less than 20 minutes to fully charge. In addition, their case can contain roughly six additional full charges, which is really useful. Another useful feature is that they don’t have a master bud, so you can listen to one while the other charges in the case.

The Bluetooth connectivity on the Skullcandy Push Ultra is adequate. They use Bluetooth 5.0, but they don’t allow multi-device or NFC connection, and their PC latency is a little high. However, their audio latency on iOS and Android mobile devices was low enough that they could easily stream videos from YouTube. It’s worth noting various apps compensate for audio lag in different ways, so your day-to-day experience may be rather different.

For combined use, the Skullcandy Push Ultra are subpar. On the one side, they’re well-made, have a secure fit, and have a reasonable low latency when used with mobile devices. However, their overall adaptability is limited by their poor battery life, inconsistent sound profile, inadequate integrated microphone, and poor noise isolation capabilities.